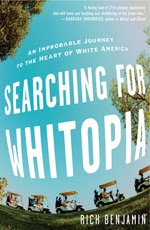 Today I am pleased to be hosting an article from Richard Benjamin, author of the newly released Searching for Whitopia.

How Will Barack Obama Fill Out His Census Form?: The Future of "Miscegenation" in America
By Rich Benjamin, Author of Searching for Whitopia: An Improbable Journey to the Heart of White America

The President says publicly that he is "African-American."But will he check "black" or "two or more races" on his 2010 Census form?

My parents, two dark-skinned blacks, married in 1967, a year when miscegenation -- interracial marriage, cohabitation or sex -- was a criminal offense in sixteen states. But now, like the Obamas, my family descends from and lives across three continents and about a dozen nations. My cousins, nieces, and nephews have complexions reminiscent of a Ben & Jerry's menu ranging from Karamel Sutra to Chocolate Fudge Brownie.

Given America's growing and intermixed minority populations, controversy broils about how Uncle Sam categorizes, then counts, ethnicity and race (more vociferously from minorities than from whites). Black civil rights advocates strong-arm those with traces of African ancestry to identify as "black," so as not to dilute blacks' 2010 census numbers and future political power. Defining and counting mixed-race people in America has historically been riddled with conceptual and practical challenges. Now as much as ever. President Obama says publicly that he is "African-American." But will he check "black" or "two or more races" on his 2010 Census form?

Over the past three decades, the Census Bureau has documented a growing number of children living in mixed-race families. In 1970, the number of children living in mixed-race families totaled 460,000. That number more than doubled to 996,070 in 1980. And it doubled again to almost 2 million in 1990. In 1990, children in mixed-race households accounted for 4 percent of all children in American homes. And in 2000, 2.4 percent of census respondents were multiracial; they ticked "two or more races" on their forms.

Admittedly, scores of Americans will brag they have another race's blood coursing through their veins. Just listen. Black people will mention that they have Native American lineage. ("That's why my hair is good.") Mustering all the nonchalance available, white people will note having "some Latino blood." (Everyone knows that white person who claims having one-thirtieth of Latino or Native American lineage, especially when affirmative action goodies are in play.) Historians contend that a plethora of Americans have some degree of multi-ethnic lineage dating from centuries back.

The ephemeral lure of multi-racial pedigree notwithstanding, the number and percentage of Americans who credibly qualify as multi-racial -- the direct biological progeny of mixed-race parentage or grand-parentage -- is comparatively small: 6.1 million people in 2006, or roughly 2 percent of the population.

The media attention devoted to multi-racial populations and issues exceeds what seems warranted, at least based on sheer numbers. From the fascination afforded to Tiger Woods' "Cablinasian" character, to a growing cultural and political multiracial identity movement, to our President's much lauded social dexterity "between" races, we seem headed for an era of multi-racial mania. Mixed-race status is consolidating its cachet and earning media validation like never before.

Is race an anachronism in our very near future, presided over by that gregarious mixed-race leader (Oatmeal Cookie Chunk)? If Americans profess their yearning for a post-racial America, why bother to count race? Does the 2010 Census's conception and tally of mixed-race people say anything instructive to the rest of us, the unglamorous mono-racial supermajority?

Another fascinating conundrum lurks. We laud diversity and race-mixing in public, but our actions don't stack up. "Americans Say They Like Diverse Communities -- Election, Census Trends Suggest Otherwise," declares the title of a 2009 study just released by the prestigious Pew Research Center. "Despite most respondents stated preference for 'diversity,'" the study concludes, "American communities have grown more racially, politically, and economically homogeneous in recent decades."

The 2010 Census puts a reality check on our wildest racial statements and dreams.
©2009 Rich Benjamin, author of Searching for Whitopia: An Improbable Journey to the Heart of White America

Author Bio
Rich Benjamin, author of Searching for Whitopia: An Improbable Journey to the Heart of White America, is Senior Fellow at Demos, a nonpartisan national think tank based in New York City. His social and political commentary is featured in major newspapers nationwide, on NPR and Fox Radio, and in many scholarly venues. He holds a B.A. from Wesleyan University and a Ph.D. from Stanford University.

For more information please visit www.richbenjamin.com.
Posted by DCMetroreader at 6:00 AM