Welcome to Mailbox Monday which is hosted this month by Jennifer at Five Minutes for Books. Below are the books that I received last week:

1) Imperfect Bliss by Susan Fales-Hill. Meet the Harcourts of Chevy Chase, Maryland. A respectable middle-class, middle-age, mixed-race couple, Harold and Forsythia have four eminently marriageable daughters—or so their mother believes. Forsythia named her girls after Windsor royals in the hopes that one day each would find her true prince. But princes are far from the mind of their second-born daughter, Elizabeth (AKA Bliss), who, in the aftermath of a messy divorce, has moved back home and thrown herself into earning her PhD.

All that changes when a reality television show called The Virgin takes Bliss’s younger sister Diana as its star. Though she fights it at first, Bliss can’t help but be drawn into the romantic drama that ensues, forcing her to reconsider everything she thought she knew about love, her family, and herself. Fresh and engaging,Imperfect Bliss is a wickedly funny take on the ways that courtship and love have changed—even as they’ve stayed the same.

(Thanks to the super-generous publisher who sent me a duplicate copy).

2) The Next Best Thing by Jennifer Weiner.  Publisher's Summary. Actors aren’t the only ones trying to make it in Hollywood.…At twenty-three, Ruth Saunders left her childhood home in Massachusetts and headed west with her seventy-year-old grandma in tow, hoping to make it as a screenwriter. Six years later, she hits the jackpot when she gets The Call: the sitcom she wrote,The Next Best Thing, has gotten the green light, and Ruthie’s going to be the showrunner. But her dreams of Hollywood happiness are threatened by demanding actors, number-crunching executives, an unrequited crush on her boss, and her grandmother’s impending nuptials.

Set against the fascinating backdrop of Los Angeles show business culture, with an insider’s ear for writer’s room showdowns and an eye for bad backstage behavior and set politics, Jennifer Weiner’s new novel is a rollicking ride on the Hollywood roller coaster, a heartfelt story about what it’s like for a young woman to love, and lose, in the land where dreams come true.

Thanks to the publisher!
Posted by DCMetroreader at 1:20 PM 22 comments:

Welcome to Saturday Snapshot which is hosted by Alyce At Home with Books. Photos can be old or new, and on any given subject so long as they are clean and appropriate for all eyes to see. How much detail you give in the caption is entirely up to you. Please don't post random photos you find on the internet.

I know I am a little late in posting this, but last Sunday was the 50th anniversary of Marilyn Monroe's death.  Several years ago on a trip to Hollywood I visited where she was laid to rest.  The cemetery itself is pretty small, but there are lots of famous folks there (Natalie Wood, Walter Mathau, Frank Zappa etc). 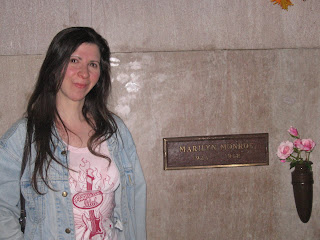 Posted by DCMetroreader at 8:00 AM 3 comments:

Welcome to Mailbox Monday which is hosted this month by Jennifer at 5 Minutes for Books.  Below are the books I received recently.  I am sorry that I have no pictures, but I came home from vacation to a bad cold and a sick dog.  Although the cold is still with me (is it true that summer colds are the worst?) my dog Maggie is recovering nicely from her lumpectomy, so I guess one out of two isn't bad.

Thanks for stopping by!

1) Unsaid by Neil Abramson. Publisher's Summary. Unsaid is about the limits (both real and self-imposed) of communication and the healing power of the human-animal bond. It is narrated by Helena, a veterinarian who has died, but cannot move on because she is terrified of confronting the mistakes she believes she has made in her life, the thousands of animals she euthanized over the course of her career, and, perhaps most of all, her growing belief that her thirty-seven years of life were insignificant.

Driven by her need for closure, connection and meaning, Helena haunts — and is haunted by — the life she has been forced to leave behind: her shattered attorney husband, David; her houseful of damaged but beloved animals; and Cindy, a chimpanzee to whom she helped teach sign language, and who may hold the key to unlocking the mysteries of animal consciousness. Helena finally finds her answers when David takes on a legal case to try to save Cindy’s life and, using all of Helena’s past work, must prove what it really means to be “human.”  Unsaid examines the significance of this looming change in very human and emotional terms, using it to explore the power of the human-animal bond.

2) Marilyn by Lois Banner. Publisher's Summary. As an academic who has been at the forefront of women’s issues for the last half decade, Banner spent nine years researching the intimate details of Monroe’s life, interviewing more than one hundred people in her inner circle and fan club, and examining confidential papers and ledgers in the final years of her life that has never been fully told. through this meticulous research, Banner refutes much of the mythology surrounding Monroe,offering a depth to her story that has never been fully told, and exposing new facets of her personality and facts surrounding her life.

Thanks to the publicist!
Posted by DCMetroreader at 12:50 PM 7 comments:

Welcome to Saturday Snapshot which is hosted by Alyce At Home with Books.  Photos can be old or new, and on any given subject so long as they are clean and appropriate for all eyes to see.  How much detail you give in the caption is entirely up to you.  Please don't post random photos you find on the internet.

On my annual trip to Panama City Beach, Florida I look forward to revisiting many old favorite restaurants including Pineapple Willys for the best ribs ever; Boar's Head for a superb steak; Captain Anderson's for the to-die-for crab claws; and the Boatyard for the yummiest and prettiest mojito.  The Boatyard's mojitos are hand muddled and come with a sugar cane stick! I can never drink just one (luckily I have a designated driver to transport me home from the restaurant). Cheers!
Posted by DCMetroreader at 8:00 AM 12 comments: