The Motion of the Ocean 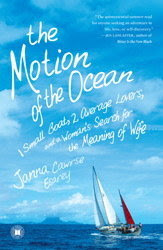 Summary: Choosing a mate is like picking house paint from one of those tiny color squares: You never know how it will look across a large expanse, or how it will change in different light.

Meet Janna and Graeme. After a decade-long tango (together, apart, together, apart), they're back in love -- but the stress of nine-to-five is seriously hampering their happiness. So they quit their jobs, tie the knot, and untie the lines on a beat-up old sailboat for a most unusual honeymoon: a two-year voyage across the Pacific. But passage from first date to first mate is anything but smooth sailing. From the rugged Pacific Northwest coast to the blue lagoons of Polynesia to bustling Asian ports, Janna and Graeme find themselves at the mercy of poachers, under the spell of crossdressers, and under the gun of a less-than-sober tattooist. And they encounter do-or-die moments that threaten their safety, their sanity, and their marriage.

Join Janna and Graeme's 17,000-mile journey and their quest to resolve the uncertainties so many couples face: How do you know if you've really found the One? How do you balance duty to others while preserving space for yourself? And, when the waters get rough, do you jump ship, or do you learn to navigate the world...together?

Review: Hopping off the hamster wheel daily grind to sail away to Margaritaville is a common dream. For most this nautical desire never goes beyond the fleeting thought stage. For Graeme and Janna Cawrse Esarey it was reality for two and half years. Stuck in a relational and career rut, Graeme and Janna decide to embark on a B-HAG (Big Hairy Audacious Goal): to sail away to the South Pacific.

The Motion of the Ocean is more than just a travel-adventure drama, however, rather it is a real life love story set on the Pacific Ocean. And just like the unpredictable course of the ocean waves, so too are the currents of couplehood. Esarey’s writing is at turns confessional and deeply moving. She admits that “sometimes the space between people feels totally innavigable . . . . Right now I’m having a hard time just navigating the islands of me and Graeme – the person I love, the person I thought I knew best in the world.” Later, she discovers that “even though the honeymoon ends, so too, do the storms. We just have to stick around long enough.”

After the trip’s termination, Esarey reflects upon the accomplishment of many personal goals: escaping her workaholic lifestyle; fulfilling her youthful dream of sailing to the Southern Cross; and finding her personal purpose (becoming a writer). While Esarey takes pride in these achievements, she professes that, “It’s not so important what Graeme and I did . . . its more important how we did it . . . By giving to each other, by relying on each other, by seeking support when each other wasn’t enough.” In short, “life’s biggest, hairiest, most audacious goal . . . [may be] Figuring out how to make love last.”

The Motion of the Ocean is the perfect Staycation read!
Posted by DCMetroreader at 6:00 AM