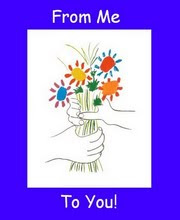 Lisa, at Online Publicist, was kind enough to give this award to me! It's the Picasso Award and as part of winning this award I am to share 7 things about me.

*I once attended a Rolling Stones concert in which Jack Nicholson sat three or four rows behind me (Unfortunately, I didn't realize it was really Jack until I got home and my mom asked me if I saw Jack Nicholson at the concert as it had been on the news!).

*I read every single Laura Ingalls Wilder book (both by and about) when I was a child and became a mini expert on her for a time.

* Staying on the reading theme for a moment. I won an award for reading the most books in my class in first grade. This award helped set me off on my current love affair with books.

*I have had almost every dental procedure that exists including: oral surgery that required my jaw to be wired shut for six weeks (twice), implants, root canals, crowns and too many fillings to count. Moral have good dental genes and drink fluoridated water!

*I paid my own way through undergraduate and professional school thanks to part jobs and student loans (which have long since been paid off).

*I once ran through a closing airline gate to board a plane, because it was the last plane of the night (this was long before 9/11. I would probably get arrested today if I tried this stunt.)

*I hate panhas/pon haus and pudding meat which were my grandparents name for the scrapple dishes they made for me as a child.

Now I am passing this award on to the following terrific bloggers:

1. Vicki at Reading at the Beach
2. Diane at Bibliophile by the sea
3. Carol at Carol's notebook
Posted by DCMetroreader at 10:00 AM